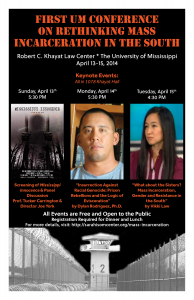 The PTCPP held its inaugural course at Parchman in Summer 2014 as an education-based response to the many calls-to-action that were made at the University of Mississippi’s first-ever national conference on Rethinking Mass Incarceration in the South, which was held at the Robert C. Khayat Law Center and Parchman in April 2014.

The very existence of the Prison-to-College Pipeline Program (PTCPP) is indebted to the Emeritus Dean of the College of Liberal Arts at the University of Mississippi, Dr. Glenn W. Hopkins. Dean Hopkins made a point of emphasizing that he saw college-level and college-aspiring students at Parchman as part of our University of Mississippi community during a 2012 faculty orientation that Dr. Pickett and I attended when he (Dr. Pickett) was then a professor at the university. Three times during the orientation, Dean Hopkins stated that he and the College were committed to providing financial and administrative support to faculty who wanted to teach college-level and college-aspiring students who are imprisoned in this state. The College of Liberal Arts has been the primary funder of every PTCPP course that has been taught at Parchman since the PTCPP’s founding in 2014.  We are and remain extremely thankful for and humbled by the College’s generosity, and hope to receive its continued support, and that of the university at large in the years to come, as the Program expands.

Soon after we began teaching at the University of Mississippi in Fall 2012, we met with Dr. Linda Keena and Dr. Christopher Simmons, our colleagues at the University who had spearheaded the Ice House Entrepreneurship Program at Parchman. Dr. Keena and Dr. Simmons shared with us that many of the men who they had met through the entrepreneurship program at Parchman were really interested in taking college-level courses—and knew of many more men imprisoned at Parchman who shared that interest. Consequently, we eagerly spent the vast majority of the ensuing months building relationships with education staff at Parchman and prospective postsecondary students at the prison, which led to our collective construction of a prison education program that spoke to these students’ expressed educational goals and intellectual curiosities. 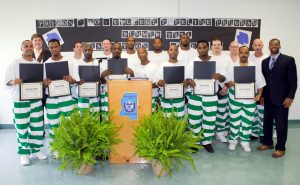 After simultaneously garnering the guidance, encouragement, and support for this Program from various departments and centers at the University, including the Department of English, the African American Studies Program, the College of Liberal Arts, the Sarah Isom Center for Women and Gender Studies, the Center for the Study of Southern Culture, the William Winter Institute for Racial Reconciliation, and the McLean Institute for Public Service and Community Engagement—as well as the backing of our fellow participants at the University’s first national conference on Rethinking Mass Incarceration in the South in April 2014, we began the Prison-to-College Pipeline Program’s 10-week pilot course at Parchman. The course met on Mondays for three hours from June to August 2014.

The course took its title from Dr. Martin Luther King, Jr.’s famous words from his 1963 “Letter from Birmingham Jail”: “Injustice anywhere is a threat to justice everywhere.” Our course, “‘Justice Everywhere’: The Civil Rights Stories of King, Hamer, and Obama,” examines the history and literature of the Civil Rights Movement. In the course, participants focus on the speeches, writings, and historical context that shaped the lives of three iconic African American orators who illuminate much of the Movement’s lessons and/or legacy: King, Fannie Lou Hamer, and Barack Obama.  In Summer 2015, Summer 2016, and Summer 2017, we continued the Prison-to-College Pipeline Program by teaching enhanced versions of the “Justice Everywhere” course: each version of the course met for 3 ½ hours on every Monday for 10 weeks and included a more diverse scope of authors—including Ida B. Wells and Maya Angelou—more readings, more comparative contexts, and more writing assignments. 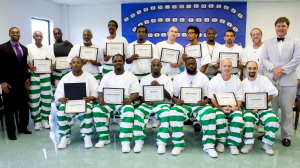 Mississippi College (MC) has played a tremendous role in the PTCPP’s development. MC supported this work since the day Dr. Pickett first stepped on campus. MC invited me (Patrick) down to their Clinton campus for official visits, administrators from the university have attended course graduation ceremonies, and the university was a financial supporter of the first Rethinking Mass Incarceration in the South Conference. Also, MC was the first institution in the state to offer college credit for students in the PTCPP.

Dr. Robert Luckett, Director of the Margaret Walker Center for the Study of African American Experience and Associate Professor of History at Jackson State University has been a dynamic guest lecturer for the “Justice Everywhere” course, as have Dr. Chuck Westmoreland, Associate Professor of History at Delta State University, and Jemar Tisby, who holds a Master’s degree from Reformed Theological Seminary, and is currently a Ph.D. student in History at the University of Mississippi. We are also indebted to Jenni Owen, who holds a Master’s degree from Delta State University and eagerly volunteered to serve as our instructional associate for the PTCPP course offered at Parchman in Summer 2015 after hearing about the Program from Dr. Westmoreland. She played a major role in helping our students improve as academic writers over the course of that term. 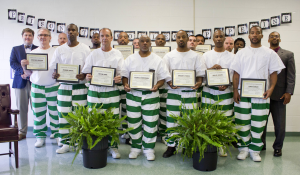 We are also deeply grateful to Allison Serraes, who holds a Master’s degree from Florida Gulf Coast University, and a Ph.D. in English from the University of Mississippi. Allison served as a phenomenal teaching assistant for the PTCPP course offered at Parchman in Summer 2017. Her thoughtful and thorough conferences with students in our “Justice Everywhere” course helped them to develop into stronger academic writers more swiftly. We were grateful for Allison’s return as a teaching assistant for the PTCPP courses offered at Parchman in Summer 2018 and Summer 2019, and we also value the significant support that our program has received since Summer 2018 from our first PTCPP intern, Julia James, a Sally McDonnell Barksdale Honors College student. We are also very appreciative of the support of Alexis Smith, who holds a Master’s degree from Mississippi College. Alexis served as an excellent teaching assistant for the PTCPP course offered at Central Mississippi Correctional Facility in Summer 2016, and she has continued as a superb teaching assistant and instructor in PTCPP courses since then.